Camp.
Possibly one of the best experiences in my life, yet at the same time there were things that sucked about it. But, no regrets.

First off. It wasn't a very physical camp. Rather, it was filled with climbing and rafting and stuff, all in a very small area. We didn't even raft for more than 10 minutes? No trekking or anything. In fact, the only thing tiring about it was staying up till 3 am to talk with Jeriel at the beach. All of you guys/girls should have gone. Would have made it more fun. Seeing Tammy's class get high to the extent that they started playing pepsi cola at 3am in the morning gave me a kinda jolt at what we were missing. :(

So we met with the rest of the 6.40 group and got ready to board the bus to PUNGGOL. Before we left Ruiyi wanted to grab the spare guitar that had been left lying around for some time, but I kinda dissuaded him (partially because I didn't want to end up walking around with a stolen guitar on my back). After a bus ride down to Marina Country Club ("I owned this river during wakeboarding"-Jianyang)we took a mega-slow ferry to Pulau Ubin. We clambered onto the island and then gathered at the conference room, where they told us about the camp and the rules.

Guess we pretty much smashed that rule to bits :) And apparently there were 3 man-sized fish in the lagoon there, some man-made giant pond. Arrowpanas or something. Ruiyi saw the head and realised it was bigger than HIS head and body combined, and that it was "white and mother ugly". I only caught the ripples it made as it swam through the water.

Anyway they had to split us up into groups, so the A13 guys had to join the 8.40 group. Seeing as only 8 guys were present, they joined us up with Cassandra's class (insane janitor)to form Group 3, or "Tiga". We got a shitty instructor though. Horny bastard. I won't waste my words on him. So we went for our first activity- the rock wall and abseiling. A13 guys had to do abseiling first, so I, Ruiyi, Jianyang and Yeekai went up this mega high tower. Yeekai and I did the abseiling first. After the part where you lean backwards into the beyond (which was kinda scary, but well)it was pretty easy. This is where we got the first hint of Jun Hong being kinda scared of heights. He started climbing the tower, but then his face suddenly turned green as he reached the top. Yet, this boy had balls of steel and bravery unmatched- he still did the abseiling as though nothing was wrong. Then we did rock climbing, which was as per usual la. Except Ruiyi didn't really tighten his harness, so the fucker of an instructor banned him from it. Sheesh man.

Then we finished up and had lunch, which was a welcome affair.

After lunch we had the rafting thing in the lagoon. Our raft was like super secure, because of Jianyang and Siowyi- super rope tie-ers. But no matter how secure it was, King Lam still managed to destroy it on the return trip. Lol King Lam destroys everything- in the end he ended up half sitting on a barrel which forced its way up, like some kinda throne. Ruiyi's raft dismantled itself halfway in the water, LOL. Ah but we helped each other to get it dismantled so we could chiong to jetty jump. Jetty Jump was damn fun, except I kinda forgot to cross my legs and so I slammed into the water from that high scaffold in a very painful way. Ouch. But again, kudos to Bruce Lee Jun Hong Balls Of Steel Loh for overcoming his fears and making the jump! heh. He is seriously brave. Ran back with the lifejackets that doubled up as chest protectors (everyone was punching each other in the chest for random reasons)that seriously weighed us down.

to be continued later tonight

alrite, i shall PUT up some photos for u guys to picture what guobin is saying. btw, i coped these photos from 06s65. I thought they were quite well taken. esp the Team Challenge Pyramid. 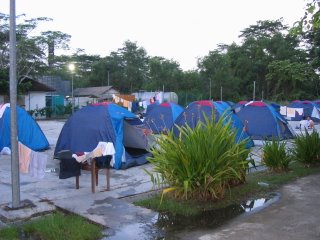 the TENTS we stayed in. They suck big time becos they are stuffy and they are filled with sweat from Apolloeans and Artermisers (HA! i seriously don noe how to describe these fac peop... ARES is like damn easy. ARESIAN...sounds so pro) 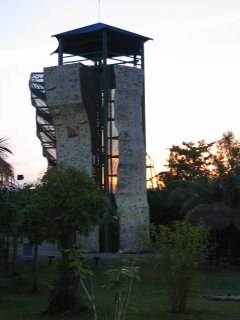 The Rock climbing place. It's like halo! We took the intermediate level while others took the beginner one loh. We so pro right :). Haaa, i din even manage to get pass the 2nd square. Our deputy fachead aka JIAN YANG is the most zai one! 8th square lah! It's not easy kay. 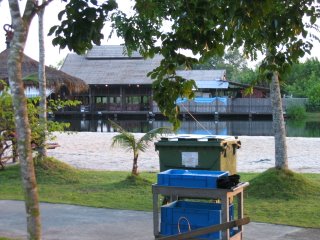 This is the beach and the lagoon with 3 HUMUNGOUS fishes. Like what Ruiyi said, they r "white and mother ugly" 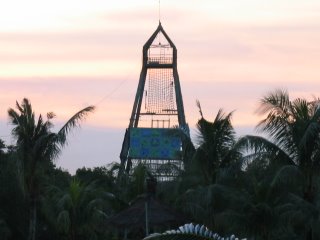 The ultimate challenge (*cough* i read up and i realised that the tower is 25m tall!!! We r zai, period). We need to overcome 11 obstacles man! However, we were rewarded with a chance to get onto the flying fox. Serious, how can any of u miss it. It was really once in a lifetime. ok, i am starting to miss tt shuang feeling when u "fly" down. 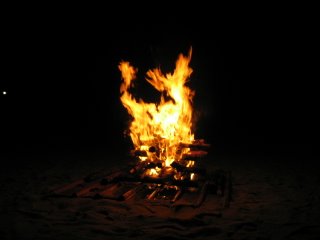 Hey the campfire. A must-have in a camp. HAHA, wait till gaobin or anyone tell u guys abt our campfire item. It was really sumthing tt u can ONLY perform during camps :D

Hmm...echoing gb's words, u guys should hav gone there. :)